Flashlight shining on 2022, a year in review

In the past year, LPL has continued to challenge, undermine, and subvert the carceral state through investigation, education, and litigation. As researchers, technologists, and activists, we remain committed to building tools, sharing knowledge, supporting campaigns, and teaching alongside and learning from those most impacted by police violence. With gratitude and pride, we write to share with you all the ongoing work and collaborations that are made possible by your support.

Your donations support LPL’s work to reduce the size, scope, and power of police and the carceral state.

LPL’s first full-time staff - welcoming Alejandro, our co-director! This year, LPL welcomes Alejandro Ruizesparza (they/them) as our first full-time staff and co-director managing operations. Alejandro was born and raised in Chicago’s Gage Park neighborhood and has actively worked against the surveillance dragnet with LPL for nearly five years. They were previously a data analyst with years of experience in causal inference research. Alejandro’s addition to the team is a step toward sustaining LPL’s work for the long-term, through building organizational capacity and strength in the abolitionist movement.

Williams v. City of Chicago In July, the MacArthur Justice Center filed a federal class-action lawsuit, of which LPL is a member, against the City of Chicago for its racist policies involving the use of ShotSpotter. Our suit claims that the City of Chicago violated the civil rights of Black and brown people after it chose to deploy surveillance tech in the communities with the highest proportion of Black and Latinx residents and lowest proportion of white residents. Find out more about the #StopShotSpotter movement here and read our blog post on the lawsuit. 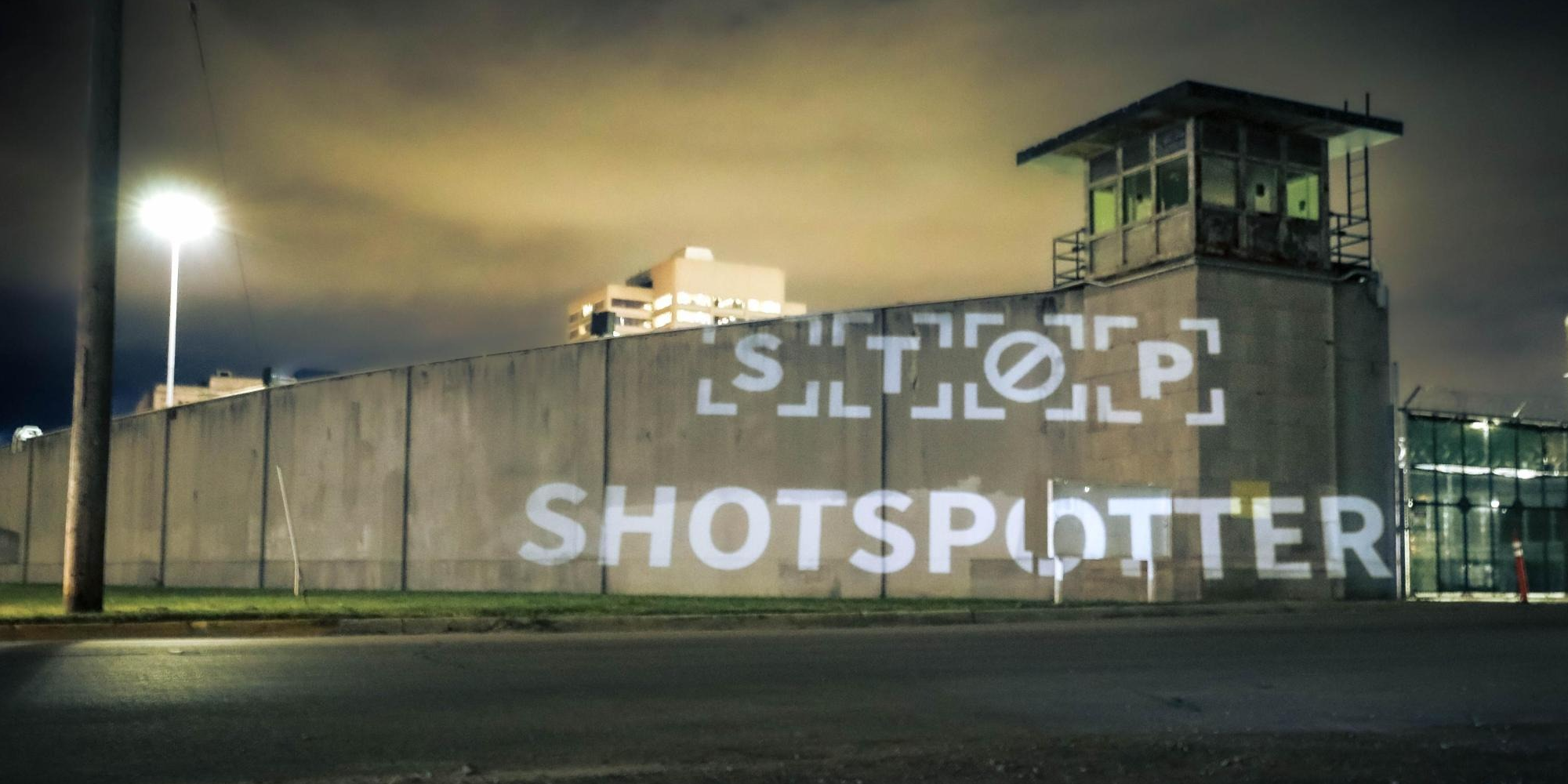 FOIA research and liberation of public records This year alone, LPL has liberated over 30,000 public records after filing more than 1,000 individual public records requests. These records demonstrate how governments and elected officials continuously harm people across the country, especially through corporate collusion. Conducting FOIA research and making these records publicly accessible is one method with which we work to demand accountability and transparency from those in power.

IDOC pandemic ineptitude: Lucy Parsons Labs v. Illinois Department of Corrections LPL exposed how IDOC’s inaction let people suffer and die in jails during the pandemic, with the agency at least partially responsible for the deaths of 87 prisoners in Illinois during the brutal first year of the COVID-19 pandemic. Following a long legal battle in Lucy Parsons Labs v. Illinois Department of Corrections, we received IDOC’s pandemic plans and its Director’s communications. IDOC’s egregious lack of support for individuals they had confined reflects the broader inadequacy of government agencies during the pandemic and this inexcusable behavior has cost dozens of lives. You can review the entire cache of documents, comprising 5,308 emails and 20,000 pages, here.

Chicago Public Library free public workshop series In partnership with Chicago Public Library, we hosted a free public workshop series as part of One Book, One Chicago, under this year’s central theme of “Freedom to Read.” Our workshops covered digital security, data brokers, FOIA requests, and digital safety for protests. Education is a core tenet of our work – we believe that learning together and sharing knowledge moves us closer to collective liberation. Looking toward the future, we are deepening our partnership with CPL and are developing a long-term workshop curriculum around digital literacy, safety, and security.

Summer Fellows This year LPL continued its summer fellowship through working with four individuals who were involved in community organizing, coalition building, and data and FOIA research in the public’s interest. We thank Fletcher, Joanna, Jolen, and Valentina for their immense contributions throughout the summer and beyond. We know that many large and powerful institutions would much prefer to see impactful, radical work crushed rather than nurtured. However, through the LPL community’s support, we are able to host individuals seeking to contribute radical insights and labor towards a more just world.

Online resource: OpenOversight Development has continued on OpenOversight, an open-source LPL police oversight project that gives the public information about their local law enforcement through crowdsourced research. This year, LPL hosted a “Find-A-Cop” workshop in June to teach the public about how to use existing OpenOversight tools as well as how to run their own instances of the project.

Mutual Aid, Giving, and Support LPL fiscally sponsors a number of mutual aid organizations in order to broaden the support communities across the country have access to while governments and corporations flounder to provide unconditional aid. Our comrades at Lincoln Square Ravenswood Solidarity Network were awarded a $25,000 grant, which they were able to process through our fiscal sponsorship, and broaden their capacity to provide mutual aid. Burlington Food Not Cops has a steady stream of almost 50 contributors supporting services in Vermont. Through your contributions, we are able to provide a scaffold for other organizations to provide services directly in their communities and access the resources needed to do so. In building these relationships we practice what we know is true – we can and will take care of each other when all other institutions fail to do so. 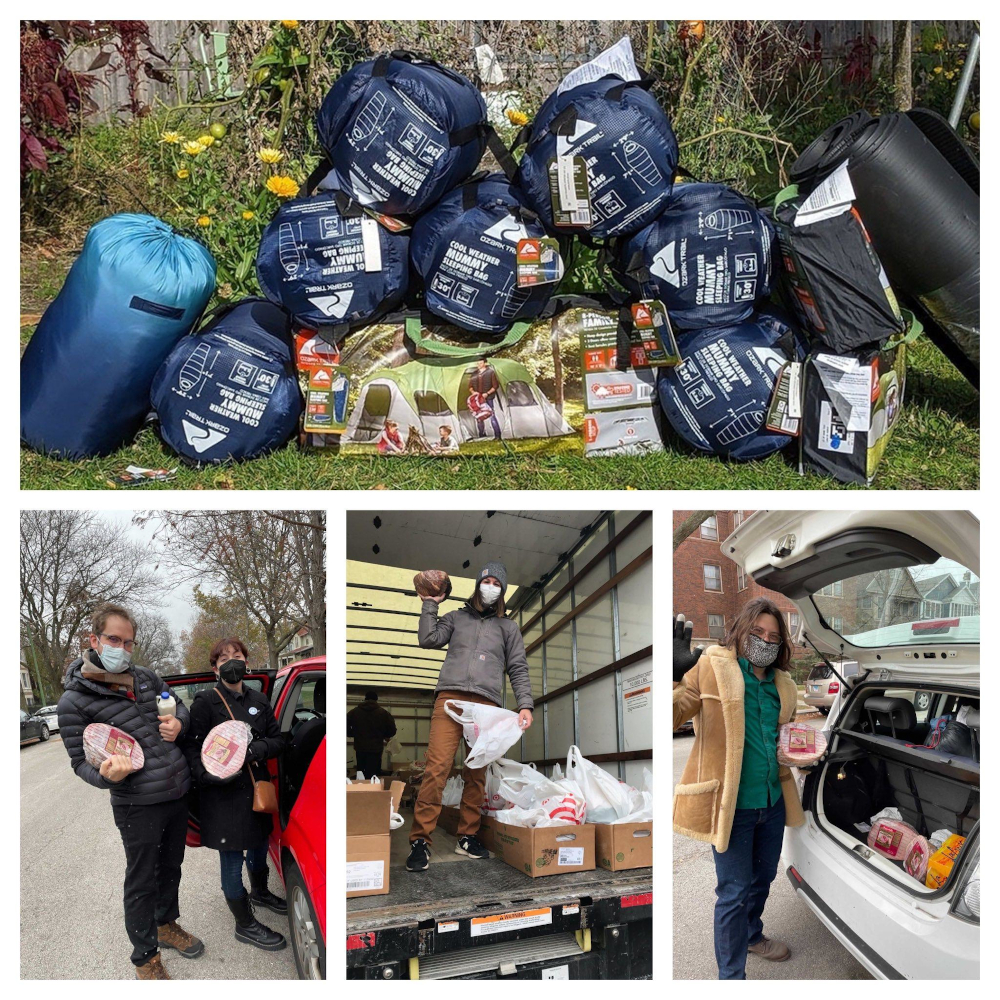 LPL’s fiscal sponsees practicing mutual aid within community. Above: BFNC distributed tons of camp gear to unhoused. Below: LSRSN members distribute over 12,00 pounds of ham and kosher food for Thanksgiving.

Looking toward the future: investigating public-private surveillance partnerships In Chicago, the expansion of the carceral state is accelerated by public-private partnerships that push historically marginalized communities to participate in surveillance by subsidizing platforms like Ring and NextDoor or hiring private security. We intend for our work to act as a counter-force to these dangerous practices, and your support grants us the capacity to investigate harmful public-private partnerships deeper. LPL believes in creating a world without surveillance, and we will continue to push back against the forces of government agencies and corporations that see historically marginalized people as nothing more than a source for profit extraction.

Radical solidarity, mutual aid, and collective action bring us closer to a just world, and we must keep fighting for it. Donors are an essential part of the greater LPL network, and each donation helps us collectively build a movement towards abolition and liberation.

None of this is possible without your support. Together we will continue to uproot unjust systems and build the reality we desire together.