In support of demands for greater police accountability in Chicago and nationwide, Illinois nonprofit The Lucy Parsons Labs is launching “OpenOversight,” an interactive web tool that makes it easier for Chicago residents to file complaints against police officers. 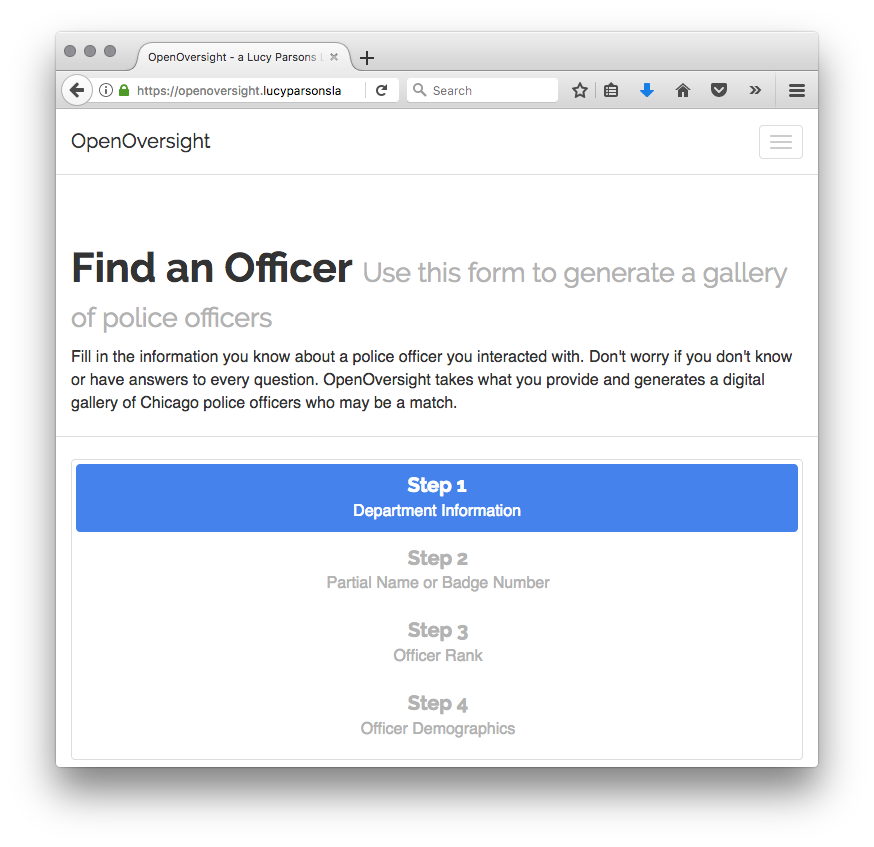 Using OpenOversight, members of the public can search for the names and badge numbers of Chicago police they have negative interactions with based on the officer’s estimated age, race and gender. Using this information, the OpenOversight web application returns a digital gallery of potential matches and, when possible, includes pictures of officers in uniform to assist in identification.

“The deck is stacked against people harmed by Chicago police,” says Jennifer Helsby, CTO of the Lucy Parsons Labs and lead developer on the OpenOversight project. “Despite a long history of proven abuses, including torture, Chicago police are almost never held accountable for misconduct or crimes they commit. To file a misconduct complaint, the burden is on the public to provide as much detailed data about the officer as possible. OpenOversight aims to empower Chicagoans with tools that make it easier to identify officers and hold them accountable.”

OpenOversight uses publicly available data from Freedom of Information Act requests, Chicago police department social media accounts and Flickr. Currently, the OpenOversight database has demographic data on every Chicago police officer and photos of about one percent of officers. OpenOversight uses data related to Officers’ performances of their duties as public servants employed by the City of Chicago; it does not include private information such as driver’s license records, home addresses, and criminal records.

“We’re hoping the public launch of OpenOversight will mean more images and more volunteers,” says Helsby. “Right now we have photographs for one percent of the officers in the department and we need the public’s help to obtain more. “We are looking for pictures of officers in uniform, in public spaces, and who have their name and/or badge number clearly displayed.”

Projects from the Lucy Parsons Labs, founded in 2015, are already having an impact on police accountability in Chicago. This October, Chicago Police settled a lawsuit brought by Freddy Martinez, Director of the Lucy Parsons Labs, seeking records on how police use secret cellular tracking systems. Martinez says the process of analyzing those records will begin as soon as police provide them. Also in October, members of the Lucy Parsons Labs worked with the Chicago Reader on an article exposing the full size and scope of CPD’s civil forfeiture program. The article made waves with City Council members, some of whom are calling for oversight and control of the police forfeiture fund.

OpenOversight is the first project of its kind in the United States and is a direct response to the failure of Chicago’s leaders to take proactive steps that allow the public to identify and report problem police officers.

OpenOversight is released as free and open source software so others can launch similar police accountability projects in their own cities. The software is available for download on GitHub.