Chicago, IL - Last week a pair of lawsuits were filed on behalf of two Lucy Parsons Labs members against the Chicago Polic e Department for failing to comply with the Illinois Freedom of Information Act (FOIA) 0, 1 . The suits were brought on behalf of two Chicago residents, Dr. Jennifer Helsby and Freddy Martinez, who are investigating the use of the Chicago Po lice Department’s asset forfeiture funds. Under Illinois law, local police can seize money suspected of being involved in criminal wrongdoing. Both lawsuits seek to trace the use of 1505 funds.

Over the last five years the Chicago Police has seized and spent millions of dollars through their 1505 funds with little public oversight of where the money is going. Some of the money has been used to purchase controversial surveillance devic es including Stingrays 2 - cell site simulators that act as fake cellphone towers and indiscriminately scoop up informat ion about nearby mobile phones. This information regarding the use of 1505 funds was revealed through multiple FOIA reques ts which LPL members had previously previously sued over.

“It’s absolutely crucial that Chicago Police comply with the rule of law” said Martinez about the latest lawsuit. “Having to file multiple lawsuits to force CPD into very basic oversight is a large waste of taxpayer money and extremely frustrating, especially since FOIA is one of the few tools the public has to investigate police misconduct”.

For her side of the lawsuit, Dr. Helsby said “FOIA is especially important when these funds are being used to fund controversial devices that have been used in many jurisdictions without strict policies and procedures to control and regulate their use. Citizens, journalists and other accountability bodies need to know that these devices exist and are being used such that they can verify appropriate steps are being taken to ensure responsible use.”

However, the Chicago Police Department (CPD) has not been complying fully with the Freedom of Information Act - often not responding or not providing documents in full. FOIA is a critical tool for government accountability and transparency. This important tool is significantly weakened if public bodies like CPD willfully violate the law and do not fully hand over documents to citizens trying to determine how public funds are being spent. These two lawsuits will help ensure compliance with the law. 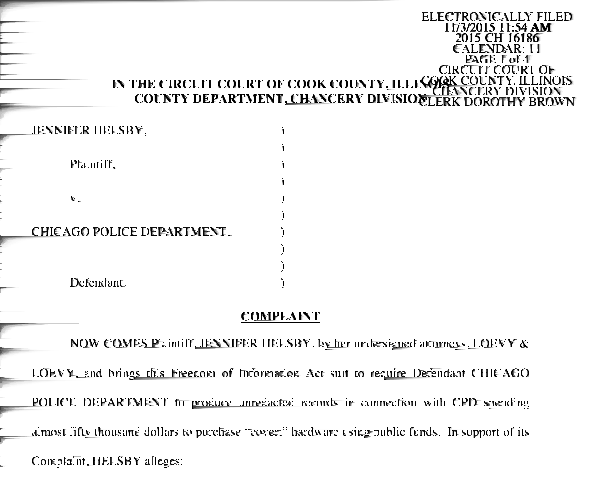